A bit of a catch-up and Moda Building Blocks

Welcome to 2015 my quilty friends.  As you can tell, my plans to blog for the last few months have gone awry.  However I have made it a goal to put up at least one post before I go back to work after the Christmas break, so here goes ...

I have been up to various bits and pieces since I last typed here.  First, I made some table toppers for my mother in law.  Pinks and blues were requested.  I used the Anna Maria Horner feather block pattern, which is very pretty, for one of the toppers.  One of the many things on my wish list is a whole quilt of these.  The other two were a tree trunk pattern.  Lots of blank space and improv piecing.  I could almost call myself a modern quilter.  Heh.


Near the end of the year, when I was crazy busy at work, I spontaneously decided to make a king sized quilt top out of an eclectic pile of Anna Maria Horner, Amy Butler and Kaffe fabrics.  Sensible decision.  Not.  This has been dubbed the Hot Mess quilt, because, well, it is one big hot mess!  It was very quick to make though - 10" squares alternated with 10" quarter square triangles.


It is going to be backed in leopard print Anna Maria Horner velveteen, which is delicious and soft and should keep us toasty warm in winter.  I just need to track down a long arm quilter for this one, because I have no intention of quilting it myself!

There is a drunkard's path cushion to go on the bed with the quilt.  This has been piped and backed in the velveteen, in a different colourway.  This was my first attempt at machine piecing curves, which, as it turns out, is not such a big deal.  If I had fussed less and tried earlier, I could have figured these ages ago!

I have also made some good headway with the Gypsy Wife quilt.  I had called it finished, but now I have realised that it needs the extra borders if it is going to go on our bed.  That means we are having a little break for a while!  I was pretty proud of myself for getting this far.


I made various little bits and pieces for Christmas, including some sew together bags, this little dumpling pouch for the Monday Modern group secret santa, and a little liberty pin cushion.

My latest project is the Moda Building Blocks quilt.  Some of us in the Monday Modern group are giving it a go.  I was completely ambivalent about this as a project until I found a pretty low volume version on Instagram, and then fell in love.  I am having so much fun with this at the moment.  I am trying to get as many blocks done as I can while I am still enthusiastic and before I get back to work.  I know that work is going to be flat stick as soon as I start, so it's sew, sew, sew at the moment!

What have you been up to?  Anything fun?  Was Christmas lovely?

WOW where do I start?!?! I love your Gypsy Wife quilt... I know from my own experience just how much hard work it is! Your colour combo is stunning! And your version of the Moda BB is actually a really lovely alternative to the original 'all-solids' one. oh and I kinda like the Hot Mess quilt too... scrappy & colourful! Linda

So many great projects! You have a wonderful eye cor color & design. And I just love that little bird pouch~that fabric is adorable!

Love your gypsy wife quilt, and am loving your building blocks. So nice to see them done in patterned fabric not solids.

You've been busy! I haven't started my Moda block yet, I must get on to it - I hope you DO slow down on making them as you'll put the rest of us to shame if not ;)

Wow Liz - you're a machine! So many makes!! And all of them gorgeous! Love the feather and trunks, the gypsy wife... wow! Had to laugh at the hot mess but such a great description :) I am going to attempt a couple of dumplings in the next couple of days after seeing all of your gorgeous ones and that little cutie was no exception! Go you going gangbusters! Looking forward to seeing your building blocks come together :)

Busy! I like the hot mess and your moda blocks.

I really like your King size quilt, so colourful and vibrant, and I really like your low volume Building Blocks too. I had a really relaxing and nice summer Christmas/New Year camping in a tent at Lake Te Anau in Fiordland National Park (New Zealand)with my hubby, son and my cousin and her husband - most beautiful part of the world I have to declare! Have a good week working on your projects!

My Goodness!! What fabulous projects! I particularly love Hot Mess, and backed in leopard print velveteen.......hmmmm!! So snuggly.

you are amazing in the amount of sewing you manage, and the beauty of it all. Loving your moda blocks quilt - I would never ever have picked those fabrics but they look amazing :-)

lovely to see you on the blog again! but i'm feeling a bit cheated because these are all your IG photos. lol. i was expecting a ton of new detail shots with your real camera. =) at least i can see them larger now!

and i'm confused - which quilt is going on your bed? hot mess or gypsy wife? or are you just going to alternate every other week. both are looking great so i don't see how you can loose no matter what you choose!

I love my little dumpling pouch. it came with me to the US and held my jewellery and hair nick-nacks. Thanks!

Hi. I can't remember where I stumbled upon your blog, but I've been reading it through. You make lovely quilts :) I'll be coming back to see new stuff!

Linda from Koka Quilts sent me your link, and I've already fallen in love with your style of combining electic elements in your low volume blocks. Love this work!!

love the hot mess quilt. Fanastic idea doing big blocks to get it done. I have some busy fabrics stashed that I just might have to use to do that quilt. Thanks and Merry Christmas

Liz
I'm a litigation lawyer by day and mum to Princess and the wee man by night. I have finally come out of the closet and admitted my secret shame - quilting. But I know I'll have lots of lovely quilty friends in blogland!

Me: full-time worker, part-time crafty type, erratically interested in quilty type activities and constantly interested in fabric shopping. Will fearlessly adventure into quilting activities with little skill and mixed results.
Hubby (aka Dadda): him indoors, he who takes care of the demands of me, Princess, the little man, the two dogs, the two distinguished Siamese, the chickens and everything else he is directed to do. In all, a good man who tolerates much, although has an inability to wipe down the bench.
Princess: 5 years old, going on 14. Brilliant, beautiful and as stroppy as her Ma.
The little man: 2 years old, completely relaxed and In To Everything. Hangs out at home with Dadda, learning to brew beer and build lego.
BQF: my best quilty friend, she who got me on this quilting lark. She is blonde and glamorous and a lawyer too. Proud mother of the ginger, 5 years old and my future SIL.
Mother: the proud owner of Henry Fish: The Quilt and Henry Fish: The Pillowcase. Also famous for being my mother and living in the deepest South (chilly).
Bernie: my most awesome sewing machine, replacement for Teeny Weeny, and my current One True Love. 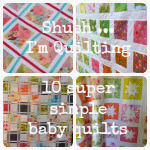